Healthy Eggplant Parmesan (and other ways with Roasted Veggies!) 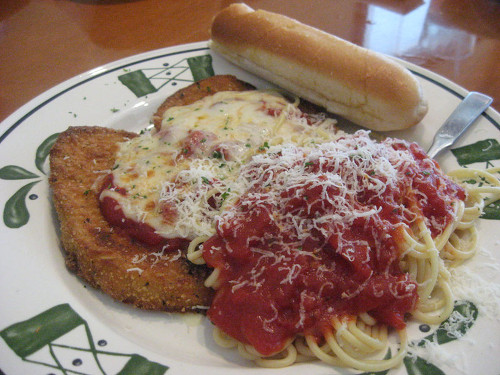 Say no to Eggplant Parmesan at restaurants!

I was talking to one of my friends recently, about how she LOVES Eggplant Parmesan, but always feels guilty eating it because it’s loaded with fat & calories. For those of you who don’t know, Olive Garden’s Eggplant Parm has 850 calories and 35g of fat! That is just way too much for one meal. I was watching Food Network, and I was totally inspired by Robin Miller’s Eggplant Parmesan Recipe. I’ve come up with a way to make it even healthier, and you can use this method to make a bunch of different meals. Enjoy!

Note: Each eggplant slice shouldn’t have more than 50 calories, so you could have 4 huge eggplant slices topped with cheese for only 200 calories! Add the pasta, and it’s still only about a 400-500 calorie meal depending on how much pasta you eat. And it’s full of healthy fiber, and still tastes great!

Now the fun part 🙂 Use this same method to make a bunch of different, healthy meals!

1) Mexican: Replace the eggplant with zucchini and other squashes to roast in the oven. Once out of the oven, top with a shredded four cheese Mexican blend and broil in the oven for 5 min until the cheese is bubbly. Top with salsa, guacamole, fat free sour cream, and serve with stewed black beans and brown rice. Yum!

3) American: Replace the eggplant with sliced new potatoes and sweet potatoes to roast in the oven (note the potatoes might have to roast longer in order to cook fully through). Once out of the oven, top with your favorite cheese (cheddar would be my pick), steamed cut broccoli, fat free sour cream, and any other veggies/toppings you like!

If you have any other ideas on how to customize this recipe, feel free to add them as a comment!

5 responses to “Healthy Eggplant Parmesan (and other ways with Roasted Veggies!)”